The common sense advice that is frequently given about social media is to keep your personal and professional identities completely separate. Much like the age-old saw about not discussing religion or politics at social gatherings, this is meant to avoid controversy, and, more to the point, not give any work associates reason to disagree with you (or terminate your job, etc.).

I've generally followed this advice, with separate blogs and distinct Twitter identities for the personal and professional. I try to keep my Facebook "friends" to only social contacts and my LinkedIn "connections" to only professionals (doesn't always work out that way). I've not gone out of my way to completely hide one identity from the other, but I've been reasonably careful about not deliberately mixing the two.

But, really, what have I got to hide? I'm not a recent college graduate with pictures of wild parties filling my personal social media streams. There are no illegal or immoral activities shared on my personal streams (although, there are some that are fattening). If alcohol is mentioned or pictured, it's most likely in reference to a visit to one of my state's many world-class wineries. The only possible area of controversy is the political.

Then, yesterday, following news of the death of George McGovern, I wondered why I am not more overtly political on this blog. The political is an essential element of the nonprofit sector. Political decisions drive the demand for social services, the results of elections can effect the flow of grant money into the nonprofit sector. And, this coming Presidential election could possibly have a major impact on the tax deductibility of the individual donations we depend on for support.

So, let me make one thing perfectly clear to any readers who may not have already figured this out: I am a liberal. Sometimes I use the euphemism "progressive," but I don't hide from the L word. Liberalism is not just a guide to how I vote, but a key to who I am. Liberal values and ethics permeate my being, and flow through my veins. It comes from my family upbringing, it comes from my religious background, it comes from my education (BA in Politics, Master of Public Policy & Administration), and it comes from my life experiences. It's not likely to be changed by a 30 second attack ad.

My liberalism is why I have made my career in the nonprofit sector. It is liberalism that keeps me dedicated to making the provision of social services efficient, effective, and possible. It is liberalism that makes me a better consultant, more interested in looking for ways nonprofits can better serve our communities than ways to extend my contract and increase my income. Without a conscious choice to live my liberalism, I would more likely have made a career in media or the entertainment industry, and made quite a bit more money. Oh well.

George McGovern's Quixotic campaign for President in 1972 was also part of the background and education that made me a liberal. Yesterday I wrote more about that on my personal blog, here: George McGovern: Acts of Faith

Let me make one more personal, political confession: I am not a Democrat. I was, from when I was able to register to vote in 1979 till about 1995. I was registered as a Green briefly after that, but have been happily DTS ("Decline to State") since. I describe myself as "left-of-center, independent." No one party or candidate owns my vote or can expect it without first earning it.

That said, my final point here is this: The Nonprofit Consultant Blog proudly supports and endorses Barack Obama for a second term as President of the United Sates.

I believe that this President, while far from perfect, has shown dedication to the issues we work on as a sector, and that he deeply cares about the people who we serve. Meanwhile Mitt Romney's private remarks to donors about "the 47%" have disqualified him from consideration by anybody who has dedicated their career to helping those on the lower side of the economic ladder.

We need to give President Obama another term to continue the progress that he has made. Further, we need to help him by removing the obstructionist Tea Party Republicans from Congress. I am an independent, who has regularly split my vote, but this year it is vital to elect a straight Democratic ticket. I hope you will join me.
Posted by Ken Goldstein on Monday, October 22, 2012 1 comment: Links to this post

The Power of We the Nonprofits 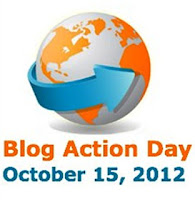 Today is Blog Action Day 2012, "Founded in 2007, Blog Action Day brings together bloggers from different countries, interests and languages to blog about one important global topic on the same day."

The topic this year is "The Power of We." A little more abstract than previous topics, such as water, climate change, poverty, or food. And yet, this abstract theme encompasses all the others with a single answer.

How do We address the problems of poverty, food distribution, potable water, etc? As individuals, there's only so much any of us can really do to effect the systematic change required to solve any of these crises. It is only when we come together in groups that real change happens.

Fitting the Power of We into the mission of this blog, to provide useful information to professionals in the nonprofit sector, I suggest that my readers take this Blog Action Day as a celebration of all that they do.

The nonprofit sector - from the local grassroots organization to international NGOs - is the primary organizing mechanism by which individuals, regardless of their position in society or their level of political and economic power, come together as We to solve the problems our communities face. The nonprofit sector is how individuals put the Power of We into action.
Posted by Ken Goldstein on Monday, October 15, 2012 No comments: Links to this post