As nonprofit professionals, we're always interested in ways to increase giving and reach new donors. Several new websites and mobile apps also seek to do just that. Some for better, some for... well, let's just say that sometimes even the folks who want to help us don't quite get it.

CharitySub is short for Charity Subscription, and the subscription fee is $5 per month. At the start of each month, all subscribers are presented with background information on three different nonprofits working on a particular cause. Subscribers then select where they want their $5 to go to. The next month, three more nonprofits are presented.

For the new (younger?) donor, who would like to learn more about nonprofits and various causes, and be reminded to try to give a little each month, CharitySub could be a great door-opener. 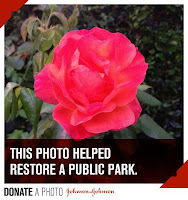 Users install the app and use it to share their photos to twiiter or facebook, just as they would with most any other photo app, but with the added graphics promoting Donate A Photo and Johnson & Johnson. In exchange, J&J will donate $1 for each photo you post (one photo a day limit per user) to your chosen cause.

Finally, we come to Budge. What can I say about Budge other than, with friends like this, who needs detractors. Yes, if people use this app, it will result in donations to charities. But it hardly encourages philanthropy. Quite the opposite. In their own words, "charity can be a bit of a drag" and "drain the bank account." But they also believe people are "fundamentally good" so they devised the Budge.

With the Budge app, users challenge their friends to contests and games. The loser of the contest "has to" make a micro-donation to a charity (no explanation of how small a donation "micro" is given). That "winners" don't give to charity - charity's only for losers - is simply not the message I think any of us want to promulgate. Thanks, but no thanks.

By the way, the apps reviewed above all came to me through a technology newsletter I get each day called Netted. Each day they send new sites and apps; yesterday's just happened to focus on charity apps.

On another note, I will be teaching a free lunchtime workshop, "Can Crowdfunding Help Your Nonprofit Raise $ and Supporters?" at the Community Foundation Santa Cruz County on Thursday, August 1st. I've got some great research into the preferences of young donors, and how to reach them through crowdfunding. Yes, I'll be talking some about Benevolent.net, but that's only part of the story.
Posted by Ken Goldstein on Thursday, June 27, 2013 No comments: