Back to the Future of Philanthropy

I received a kind email from Erik Anderson, of the Donor Dreams Blog, suggesting I take on the subject of The Future of Philanthropy for this month's nonprofit blog carnival. Easy peasy, right? Well maybe not.

Ms. Fulton begins her exploration with the establishment of the modern foundation form in the U.S. at the end of the 19th century by the Rockefellers, Carnegies, et al, but, indeed, the concept of philanthropy goes back to ancient Greece, meaning "love of humanity," and encompasses the giving of time, heart, and soul, as well as currency.

Not long after, "a group of London merchants and gentlemen" met to "discuss a plan to supply two or three thousand seafarers for the navy," founding the Marine Society. They, of course, sought sponsors and donors to support their efforts. Certainly that qualifies not only as philanthropy, but as professional fundraising, and maybe even crowd-funding.

Ms. Fulton references Warren Buffet, and another of her slides bears the image of Richard Branson, but what really differentiates these modern philanthropic leaders from Rockefeller and Carnegie, or even from the gentlemen who founded the Marine Society? Is it their motivation, is it their philosophy, or is it their tools?

Ms. Fulton describes the philanthropy of 100 years ago as "closed-small-slow-fragmented-short" and contrasts that with the "open-big-fast-connected-long" world of today's philanthropy.

What draws that comparison is not any change in the concept of philanthropy, it is all about the tools. 120 years ago, Andrew Carnegie building libraries across America was very open, connected, big,  long, and somewhat radical (okay, it probably wasn't "fast," but what was then?). Today his approach might be to distribute iPads to students instead, but his philanthropic ideals would likely be the same.

Even the much vaunted "democratization of philanthropy" is nothing new. If you read my blog, you know I absolutely love crowd-giving sites such as Benevolent, etc., but at their core, they are simply using new tools to expand upon the giving circles of previous decades that were, themselves, just updates of the old mutual aid societies that go back at least 250 years.

I guess what I'm saying is, the impulse to philanthropy is as old as society itself, and that the forms it takes always includes both, the "small and informal" (mutual aid to crowd-funding), and the "large and influential" (Carnegie to Gates). What evolves are the methodologies and tools.

There are certainly trends - I've lived through several: money for technical assistance, money for programs only, highly focused outcomes, more data, less data, forcing mergers, encouraging cooperation, and a few others - but those are changes in bureaucracy, not philanthropy.

So, I suppose my predictions for the Future of Philanthropy are as follows:
Solve that last problem, and then we can talk about real change and a brighter future.
Posted by Ken Goldstein on Thursday, May 14, 2015 No comments:

Last week I attended the "What Really Matters" webinar from Abila to discuss the findings in their latest Donor Engagement Study. There were a few surprises in their latest findings, and several confirmations of what we've always known, or at least should have sensed. 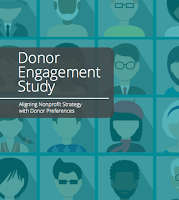 On of the key points that should be obvious, but bears repeating, is that Content is King. What you say is more important than the frequency with which you communicate, or even what medium or channel you are using.

And, when it comes to that content, what donors are most interested in is stories. Again, many of us have been harping on this for years, but too many nonprofits have still not heard the message: Your data may help get a signature on a large check, but to get to that point you need to share just one personal story of how your nonprofit has helped one individual.

When it comes to Abila's findings that should come as a wake-up call, the most startling is the how misaligned most organizations are with the preferences of their donors.

For example, while many nonprofits are dividing their donor lists by gift range, and are differentiating their strategies for large versus small donors, only 3% of groups are always dividing and strategizing differently by age group.

Age of donors matters! Each generation has different communications preferences, from what channel (mail, email, social media...), to the frequency, to the message. If you have the same strategy for reaching millennials as you do for their grandparents, one of them (at least) isn't going to be impressed.

As presenters Tad Druart and Rich Dietz pointed out, our donors are consumers as well, and they are used to communications from companies like Amazon or eBay that are highly differentiated and targeted based on dozens of factors. When we, as nonprofits, treat all donors like just another member of the herd, donors are noticing and turning away from us.

There's a lot more in the report, but I'll leave it up to you to discover. You can visit the Abila.com website to download the full report (it's free).
Posted by Ken Goldstein on Wednesday, May 06, 2015 No comments: