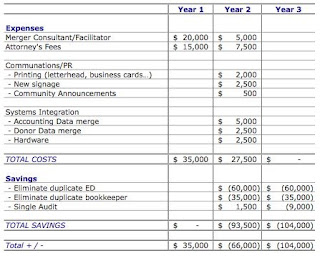 As you can see, while mergers may save money in the long run (and even that is often questionable if the deposed ED is needed to stay on to manage a second site), there are considerable upfront costs, and a major time investment required to make them work. And, bringing us back to the start of this post, the partnership has to make sense.
Posted by Ken Goldstein on Saturday, March 14, 2009